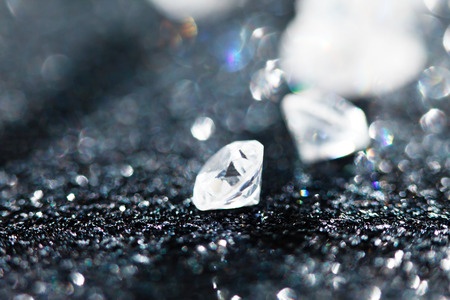 Peanut butter and diamond sandwiches: the next big thing! Would you believe us if we told you that geophysicists have successfully created diamonds out of peanut butter? Well, geophysicist Dan Frost has been trying to mimic the conditions that occur in the Earth’s lower mantle in his lab in Germany, and a byproduct of his research is the creation of diamonds. The conditions that he’s looking to mimic include temperatures of up to 4,000 degrees Fahrenheit, and extreme pressure, up to 1.3 million times stronger than normal atmospheric pressure We already know that diamonds are made up of carbon atoms that are crushed under tons of pressure and cooked at unbearable temperatures until the atoms are rearranged into a crystalline structure.

So, logic suggests that all you need to create diamonds is carbon, extreme pressure, and extreme heat.

Frost had each of these three ingredients in his lab; the pressure and heat from the experiment that he had been working on to recreate the conditions in the Earth’s lower mantle, and the peanut butter from his lunch. He thought he’d put the three together and see what happened and ultimately, he was able to create a diamond. Even though the process takes a couple of weeks to form a very small, 2-millimeter diamond – Frost hopes that his research could be used in industrial applications in the future. We’re wondering if he’ll send us some samples in a nice cushion cut. What’s next, emeralds made from carrots? At Action Compaction Equipment, we know that waste and recycling are two of the most important issues a business will undertake. We offer quality built machines, specified and installed to fit your application and needs. Contact us at (801) 565-1033 for more information today!]]>